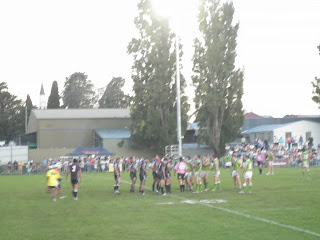 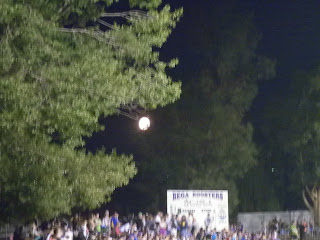 I remember as a kid going to see the Raiders up against the Steelers in a Tooheys New Cup in Bega, it must have been in around 1992 or so, probably the first time I had seen the players in the flesh, a great experience, probably still one of my favourite footy experiences.
So I was pretty excited when late last year the Green Machine announced they would be playing again in Bega, after about 15 years out of town. The game before, I think it was a double header, Norths v Brisbane and Penrith took on somebody else. These matches didn't have that same local flavour of a Raiders v Steelers match though. That must have been about 1994 or 1995. Since then the ground was not considered up to scratch, but an injection of cash from the Federal government and the ground was getting an upgrade, enough of an upgrade to host the Raiders and the Storm.
I finished work on Friday night and the plan was to head down directly. We got off to a bit of a late start and didn't get on the road until about 8pm. The gang was myself, my wife and Jonathan, my usual Raiders-watching pal. The last league outing for this trio was a success, the finals match in Penrith, so I was hoping for more good times.
Once coming down Brown Mountain we were engulfed in a thick fog, so it was pretty slow going, we arrived fairly late at my parents' house and pretty well went straight to bed.
Jonathan and I had a bit of a ride around in the morning, I had Mum's pink bike, a very masculine look. We rode out to Tarraganda, then around the town. For the first time in a long time, the river had plenty of water in it, what has come to be a rare sight in Bega.
Once we got back from cycling around, it was time to head to the beach. We went out to Middle Beach, from the lookout there didn't seem to be a great amount of surf, but there were a few people out and they were catching some waves. We got down to the beach and it seemed to have increased in size. The tide was getting lower and the sand was precariously close to where the waves were breaking, so there was always the worry if something went wrong, that you would get a face full of sound. Jonathan hadn't really been out in waves like this before, he was asking how to get right out the back. I told him it's just like the footy, you have to charge up and just try and break that advantage line, gain a little ground every time, and hopefully you will charge through eventually.
I got a few good waves, but most of my time was spent hoping to come up for air. My last wave was a nice late take off though, got up plenty of speed, and once finished decided it was time to head into shore.
We got home and got ready for the big match. We arrived for the 5pm kick off of the under 20s game, and the game was already on, even though it wasn't 5 yet. The Storm were already ahead, and they scored not long after. They continued to score, getting out to a 28-0 lead. The little Raiders got on the board eventually, McIlwrick going over soon after arriving on the field, to bring it to 28-6. In the end it was 34-16.
There were some girls behind us, as Dad said, they "didn't represent Bega so well". We were sitting just behind the dead ball line at the Northern end of the field. They had some wise insights, such as "the Storm players are so much hotter than the Raiders in all grades". During the half time break there was a girl's Oztag match, one of the girls from the Bega Roosters team went over for a try after a nice chip and chase effort. "That bitch deleted me from Facebook cos I kept posting pictures of Storm players"...suddenly I liked the idea of this girl.
As part of the pre match entertainment a helicopter was going to bring in the trophy. In order for the chopper to land, everyone sitting in our position had to move on out. In a game that was pretty well sold out (crowd 6169), there weren't a lot of places to go, however we found a new spot, in line with the 10m line just around from where we were sitting previously.
I was amazed by the amount of purple in the crowd. Bega should be through and through Raiders territory. So I'm not sure if it was people travelling from Victoria, or that the silverware in the cupboards of the Storm (falsely earned) had attracted some more fans here in Southern NSW.
After the helicopter then came the official opening of the new facilities at the ground. Now did this ever go on. First was John Dixon, on behalf of the Aboriginal Land Council. He himself played many years for the Bega Roosters. I think he may have been captain coach at one stage. Following him were a variety of footy bosses, politicians and it seemed anyone who else who wanted a say.
The teams trained on the field. The Raiders were directly in front of us. My mum asked who the player to look out for would be. With Dugan, TLL, Tonguey, Campo, Orford and Joel Thompson all missing, I wasn't so sure who would be playing a starring role. I selected Shillington (16) and Brett White (10). 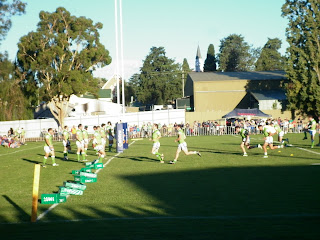 A while after the stated time, it was kick off. The Storm kicked things off, and the first period had pretty well the strongest lineup available of the 30 players each team used.
The Raiders started with a team of something like
1. Milne 2. Robinson 3. Croker 4. Stuart 5. Vidot 6. M Picker 7. McCrone 8. Tilse 9. Buttriss 10. White 11. J Picker 12. Harrison (c) 13. Fensom
While early signs were positive, the Raiders continued to drop the ball in attacking positions. The game was being played in three thirds of thirty minutes, just to show it really wasn't a real game. The first third had each team fielding pretty well first grade lineups. Melbourne looked like they usually do. Even though they were missing Billy Slater, Cameron Smith and Cooper Cronk, they were still playing a very structured lineup, led by Garreth Widdop, the English fullback playing with the number 7 on his back. I think they plan to use him at five eighth for the year, after from Raider Brett Finch packed up and went to England, and I think he will flourish there.
Just towards the end of the first 30 mins, Brett White put on a huge hit on one of his old teammates, dislodging the ball and setting up a scrum in great field position. Josh McCrone back himself for a grubber but the ball went over the dead ball, it was followed by a flying McCrone sliding through after it, but he was a long way from the ball. Something that has been lacking in the Raiders game the last few years has been communication on kicking options, and it seemed there that no one else in the team had any idea about it.
The scores were locked on zero at the first break, the scorekeepers not bothered at all by either team. Within the first period of player there were a number of penalties against both teams for play the ball infringements. The refs keeping their promise to crack down on this area. In my opinion, there are worse things that need to be looked at, and this really bogs down the game, into a game filled with penalties.
Some of the younger players got their chance to impress in the second period, but it was Chase Stanley who was impressed, waltzing through a couple of big defensive holes to score the first two tries of the match. The Green Machine needed to get over the line in this third, and young Sam Williams sent the ball on to Croker who passed on to Vidot to charge over in the corner.
I'm sure young Croker would still be having nightmares about his last kick, the missed goal in the final against the Tigers, and this was not an easy kick to begin 2011. From directly on the sideline, in some muddy grass, pretty well in the dark. It was no surprise he missed.
That kick was no concern though really, Croker was by far the best player in Green. From watching that game I felt this is going to be the breakout year for the kid from Crookwell. After making the training squad for the Australian team last year, looks like he will be keen for some more recognition.
For the other backs, David Milne had some strong kick returns, but one particular howler dropping a towering bomb, he knocked that back, but then picking it up on the tryline, he dropped it forward. The Storm scored from the ensuing set.
Reece Robinson played strongly while he was on. He took a great take on a bomb, and for his troubles got tackled in the air by a Storm player, earning the Green Machine some more ground from the penalty. James Stuart was probably the worst of the backs. He got quite a few games last year when Joel Monaghan broke his thumb, and showed himself as a winger unable to score tries. In this game he mainly featured by dropping the ball or missing tackles. I didn't see much of Nathan Massey, a new signing for the under 20s, and Drury Low could have scored a late try but dropped the ball in open space.
From this slight description, you can imagine the frustration watching this game of the continuous dropped ball, particularly in attacking positions. The third period had the most inexperienced lineup on the field, it was the same for the Storm, many of them not even wearing a number, but they still held their structures. It seemed the Storm had a heavy off season getting into shape now that they are once again eligible for premiership points.
They scored a couple more tries in that last time period and the final score was 24-4. Of more interest to me was a text from Jonathan. "They're giving away food at the BBQ tent". I was there immediately. So at least that was some kind of score.
We walked back home, the lost wasn't so hard to fathom, it's only a trial, what does it count for. Eels fans had a different attitude after they beat the Tigers 30-10. According to them, trials show everything. The best part was that no one got injured. The Cowboys weren't so lucky, it seemed most of their new signings got injured during their trial up against the Broncos in Alice Springs.
A 3-2-1 for the Raiders:
3: Jarrod Croker- top game, will be a star this season
2: Brett White- showed he will be a very worthwhile investment and crunched a few of his old team mates.
1. Shaun Fensom- always seemed to be ready to take another run, make another tackle