After the travels I mentioned in my previous post, in reality I should have come home, worked hard on saving, reducing costs, planning the trips later this year.
But the road beckoned. Mum and Dad told me they had some guests, my auntie, uncle and cousin, so I popped down to Bega for just over a day.
The word was they were going to take a trip to Mumbulla Falls (pictured) in the morning, so I got up quite early, and I had hit the road by 6am. Midway along I got a call from Mum seeing if I had left yet, and I told her I'd be there in an hour.
Our access to the falls was blocked about 1km from the normal place, with a tree across the road. This was after a meandering cow had blocked our way further back on the track. Welcome to the country.
Once we got there, the water was crystal clear. I had been planning to probably not go in, but once we got there, the sun was up, the water looked good, and the slide had plenty of water running through it. I dipped my hand in the water, it was pretty sharp, but we'd come on an adventure, so I went in for a few jumps.
Although we had the whole place to ourselves, we didn't spend too long in the water, as it was freezing. The afternoon we spent watching my mum play in this wildlife park, Potaroo Palace, on the road to Merimbula. She was playing for quite some time, so I was checking the tweets once the Raiders game started. Things weren't looking good when we drove back into town.
However the Green Machine put on 24 points in 9 minutes, and the game was into golden point. Too bad they lost that, but that was a great 9 minutes. If you had that to the 22 minutes against the Cowboys before losing Dugan and Campo in the space of 8 minutes, you're getting towards a decent half of footy. What a disappointing season this year has been. Maybe next year...
We were talking about a sunrise beach mission the next morning, but the more we talked about it, the less appealing it became, so the next morning I hit the road back home. The day I left we got a new housemate back in, but apparently I missed a good night to miss, and by the time I was back, that feller was a distant memory already.
A few days later I was on the road again. I was actually meant to go to Malaysia last weekend, but plans had to be changed at the last minute. My flights to Malaysia were from Melbourne anyway, so I decided I'd head down there for the weekend.
On arrival at the airport, the jokers at Qantas laughed in my face and told me I booked my flight for the day before. One of a string of stuff ups recently, but I wasn't going to let that stop me, so I rushed into a taxi, got to the Jolimont for the 8:45 to Narrandera. A change and sometime in the middle of the night, we were off to Melbourne. With the sun just starting to think about coming up, I was there.
After a lunch at Crossways, one of those Hare Krishna joints, I wandered around the NGV. Although Victoria is not its own nation, there are not one but two National Gallery of Victoria. There was a cool Everfresh exhibition there. I also popped into Sticky to collect my Eurovision pack, featuring Capital Eyes #12. Whilst there I also picked up If Destroyed Still True #5 (I think).
I had a kick with Ryan Richardson, the inclement weather meant we had to go behind the gallery to The Cave. The students wandering the gallery seemed more impressed with the footbag then with the paintings....
After the kick I actually went for a swim. It was a cold day, but the pool was heated and I was hoping this would relax a few aches and pains. It didn't really work, but it was good in the pool, and there was no one else there.
I met up with Megan, a good friend of mine, from school. We went to a bar called Cabinet, I'd never been there before, but I quite liked it. Not too many people and they will come and take your order at the table.
I got to see another good friend later on that night, I guess Melbourne is just full of friends of mine from different eras. Friends from school, friends from when I lived in Sydney, friends from when I lived in Melbourne and friends from Canberra.
It was Michael, an old workmate of mine, it was his 21st. We went upstairs to the Noodle Kingdom, where we had shared a great 3am meal in the not too distant past.

Some of his other pals made him a cake. A one ring cake. It was very tasty.

From the Noodle Kingdom, filled with food and still with plenty of money in the wallet, we jumped on a tram for a couple of stops, and wandered to North Melbourne, another revisit, a place I mentioned in the last post, our dart playing place. It was a bit too crowded for playing darts, but they did still have the appeal of the $10 jug. Bargain.
It wasn't too late a night, so I was feeling reasonably fresh the next morning. We went for some bagels for breakfast. I had another kick planned and headed down to Fed Square to meet with Dan Ednie. Dan has been one of the best players in Australia over the past years, though he has been otherwise occupied and hasn't been kicking too much. We had been kicking for a while, and were joined by a familiar old face, Brendan Erskine. Brendan was one of the earliest footbag players in Australia, and he taught me a few tricks when I was first starting out in freestyle.
After our kick, we went for some lunch. A lot of places were closed, but the ever reliable Noodle Kingdom was open for action, one of the waiters actually recognised me from the day before. Lynton Stephens, another Aussie footbag legend actually called while we were playing and they arranged to go for dinner later on. I wasn't able to join in on that, as I had a flight to catch.
I didn't bother to repeat my walking feats of the last visit, so just jumped on the skybus and was at the airport not too much later. Not all that long after that, I was in Sydney. Francisca had come up to Sydney for the weekend, so I thought rather than fly back to Canberra, I could join her there.
We were both pretty tired so not much was on for the night time. After a big breakfast feast at Grandma's, we were meeting up with some more friends, this time it was Nathan and Brooke. We met them in Gladesville, but instead of waiting an hour for a bus, we just walked. 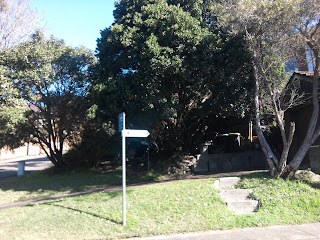 It was quite a pleasant journey actually, and it didn't really take that long. We went to the Bayview in Gladesville where we had plenty to eat, a big lunch. To digest the lunch, we took a walk down to the ferry. We passed the Gladesville skatepark, which I never knew existed, and we watched some young kids go around on there. If that had have been around many moons ok (maybe when I lived in Sydney), I could imagine myself spending plenty of time there.
We caught the ferry into Darling Harbour, and something I noticed while walking was that things had changed. Once the home of getting incredibly ripped off, now every place is trying to outdo each other for deals and cheap prices. $10 steaks here, all day, $3 drinks, 2 for the price of 1. I'm not sure what brought this change about, but I like it!
We didn't stop to take in any of the deals, but went to the park just near Central Station for a quick kick with Dyalan Govender. We didn't have too long, as I had a bus to catch, but I got through my routine with two drops, twice which put me in good stead for the nationals.
From the kick it was straight on the Greyhound and back to the cold of Canberra.
Now, I should be getting back to what I mentioned in the first sentence. Instead, I'm about to pull in to Sydney...
Posted by Daniel Boyle at 6:32 PM