One from the vault 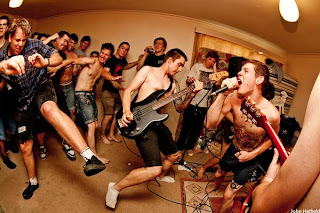 Julian just posted up the long lost Condorcet cover of the Slowburn "classic" Take A Swing.
I decided I should put up the interview that I did with Sean, who also played in Condorcet, and now plays in Loveshy.
Most of the other guys who were in Slowburn play in I Exist, who you can scroll down the page slightly to see the interview I did with them a couple of weeks ago.
(I changed some stuff in the questions like "this year" became "last year"-sean)

1) To start with, who's in the band and what do they play
Aaron Drums, Sean and Sam guitar, Dave sings, Petey plays bass.

2) Slowburn has played with some really big name acts throughout last year (eg Terror, Mindsnare, Internal Affairs etc). Has there been a particular highlight in the Slowburn live experience?
Sean: For me our set with Miles Away at The Jamo was a favorite. I think mainly due to the atmosphere, for some reason all the lights were off so we were playing in almost darkness. Multiple circle pits and kids screaming along. I also really like playing house shows and sweating a whole lot during them.


3) When you changed the name from Top Gun to Slowburn, did this reflect a change in the original objectives of the band, to more of a serious project
Sean: The idea at the start was to play really short and fast youth crew inspired music. We had maybe 3 songs of that sort of stuff done pretty poorly. After that we branched out a bit I think while still playing hardcore. The name Top Gun was just a sort of silly name that Dave came up with as we needed a band name. We were getting sick of the whole top gun "omg like the movie?" thing so we changed it. I think we have always been a serious project, it's just that we wanted to change the name.


4) Your fan base has grown strongly in Canberra, and you have played a few shows outside Canberra... how have you been received being an "out of town band" when playing these shows
Sean:We haven't really played many shows at all out side of Canberra. Our first show in Sydney was a bit crap I remember. However the out of town show's we have played so far this year in Melbourne and Sydney have been much better. I think when your playing to people who don't know you it's kind of exciting and you just run yourself dead onstage maybe make an impression. Playing down the south coast is lots of fun to, it's pretty much an extended Canberra scene down there.

5) So you've recorded some songs for an EP...how is it sounding and what are the plans for its release?
Sean:It sounds really good to me. I really really like all of the songs on it, and it's pretty diverse. We did rough recordings of the songs before hand and I wasn't so siked on some of them, but after recording them properly they have come out sounding so big. Recording in a real studio is a new thing to us so it was kind of strange to us at first but the lady who recorded us was super at her job and put us at ease. Not sure exactly when it's going to be released but hopefully soon, it's all a matter of money and we are all really poor.

Here is the video to the song Sleepwalker.

6) Do you think the band is always improving, as this is the first serious band for most of you guys?
Sean:Well I think we have improved in bounds since we first jammed as all bands do. Me and Aaron have had a bit of experience with being in bands, but I think the way in which we operate and how things are going is a first for all of us. I definitely think that with each recording we have improved in song writing.


7) You've had a lot of opportunities this year with international supports etc, do you think if you were a band outside of Canberra you would get this opportunities at such an early stage of a band?
Sean:Probably not, if we were in say Sydney, I doubt that we would of got some of the international supports that we have. When we first started there was seriously only two or three bands that loosely fit into the hardcore category in Canberra which meant that there wasn't much choice if you wanted a local support. It's good to see that there are a few more now, it's not like there is a huge scene but it's definitely picking up.


8) Canberra has always had a serious problem with venues, why do you think the problem always continues and can you see any solution to it?
Sean;Well maybe not so much a problem with venues but all ages venues or licensed all ages venues. It is really frustrating to be under age and miss out on seeing bands, when they play an overage show that isn't attended as well as it could of been if all ages. Under age kids are what keep the scene thriving and it is vitally important for there to be an all ages venue that is hardcore friendly. I remember being so bummed when I was underage missing out on shows purely because of my age.
In Canberra we need someone with a clue and commitment to set up a medium sized allages venue. Sound Underground had so much potential for this but unfortunately the guy who ran it (while being a really nice guy) didn't have much of an idea how to operate a business. Jamison inn, while used as a venue for hardcore shows a lot in 2007, became increasingly hostile towards hardcore shows. And now the place is getting knocked down, so it's a no go anymore.

9) What are the best bands going around at the moment (international and Australian)?
Sean: Australian wise I am currently really into Pisschrist, Extortion and SJN. These bands are being just so much more hardcore that most pap out there. The emerging 'screamo' scene of bands like Eucalypt, Majorca, James Dean etc. has gotten me really siked on screamo in australia which was just about dead for sometime. Internationally, because I'm a heaps fruity dude, I have been getting heaps into Canadian indie like The Arcade Fire and Tegan and Sara.

Thanks for your information by Revathi

Thanks for your information by Revathi