I remember just how it used to be...

I am going to make some posts about my little holiday that I recently went on. My main reason for going was to compete in the 30th World Footbag Championships in Berlin, Germany. I took a month of work and did some extra travel before and after the trip.

Even before the trip begun I had quite a good time. For some crazy reason, my work decided to throw me a sweet party for my last day in Canberra for a while. This is normally par for the course when a manager leaves, not when someone just goes on a little holiday. But it was awesome, well and truly overcatered, however we managed to drink all the beer and wine and eat all the food. I work in a hostel so a bunch of the long term guests joined us for the party, as well as a bunch of Americans who happened to stay the night. It was a lot of fun, and it set a high standard for the rest of the trip.

I was originally going to catch the 4am bus, but at about 3am decided I could wait until the morning for a more reasonable hour. On the bus trip I was feeling rough, but I got there in one piece, which is always important. I had a night booked at the Railway Square YHA, so I dumped my bags and met up with my footbag friends.

Canadian player Andrew Grant had been staying in Australia for most of the year, and was heading back to Canada so we had decided to have a bit of a farewell kick for him. I was not playing very well this day, but I was just really happy to be there, with a great turnout, which is quite rare. We had Ian and Dyalan, the stalwarts of the Sydney scene, as well as Max, a French player who has been living in Sydney for quite some time, and even a new player, Ryan. We had a good long kick, then headed to a nearby pub for a few beers. 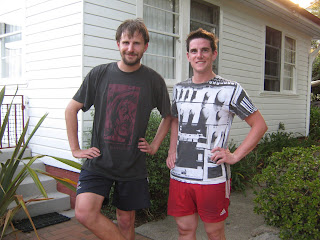 Here is a photo of Andrew and I from an earlier trip. We spent a week in January along the NSW South Coast, this is out the front of my parents house. We had dinner together the next night as a final farewell. It was really great to have such a good player in Australia, and it was awesome becoming such good friends. Andrew left the task of defending his 2nd place in Shred 30 from last year up to me. I failed.

I was going to see Break Even that night, but the show was sold out. So I just walked back to the hostel and soon after I was asleep. The next day my Grandma was the one putting on a big party for me. There was a big turnout of many relatives from both sides of the family, and I was lucky enough to be given some extra money for my trip. I was disappointed I didn't get to see my cousin Tom, he is very elusive. I did get to meet his girlfriend Marie however, she is a total babe. However, I would feel quite weird attending a family function of a partner when they're not there.

I was driven to the airport, which is a very easy way to get there, and avoids the outrageous costs it takes to get to the Sydney Airport. My Mum saw me off, then it was up, up and away.

I was flying with Korean Air, this was actually my first ever overseas trip. Many people couldn't believe that I was 24 and only now just going on my first trip. I have covered Australia fairly extensively before, so I wasn't too concerned. I've always found the cost of a passport way out of my budget, but now I have on for ten years, so I'm set. The flight was fairly uneventful. The guy I was sitting next to had actually been living in Canberra for the last couple of months, but his English was not all that great, so we didn't talk too much. I was reading a really good book called "Into Thick Air" by Jim Malusa. His aim in the book was to visit the lowest point below sea level in each continent. The author is a botanist by trade, so his descriptions of the landscape and wildlife were vivid to say the least. I forgot to say that his mode of transport to get to each of these destinations was by bike. It was quite an enjoyable read.

On arriving in Seoul I had a couple of options. Due to the length of time between my flights, I was able to stay in the Hyatt hotel at no cost. I had also planned with a friend to go and visit him. The problem with this was that it was a 3 hour bus to get there, and I would probably miss my plane the next day if I did that. My first task was to actually get out of the airport. This proved enough of a mission to deter me from any more adventures, so I checked into the Hyatt. I met a couple of people as we tried to navigate our way out of the airport, and we all had dinner and breakfast together. These meals were all free as well, the breakfast had an especially extensive selection.

This was my bed in the hotel. It was quite comfortable.