So over the weekend we went out to Hook Island, the second largest island out of the 74 Whitsunday Islands. We stayed at the Hook Island Resort. As an agent we got to go free of charge, which was pretty sweet.

Now I had heard from a few people that the place is looking a bit worse for wear, and they were definitely on the money. It is really relaxed though, it's a pretty sweet experience to wake up , walk out the door and be on the beach.

Now that view was not quite so pleasant for one fellow earlier that morning, who would have walked out to the beach and said "I swear I parked my boat there, straight out in front". Unfortunately for this guy during the night, some heavy seas had tipped up his boat, and now it was under the sea. Apparently he didn't have insurance, which is something I can't comprehend the stupidity of..."hey, honey check out my boat...no need for insurance, it's unsinkable". 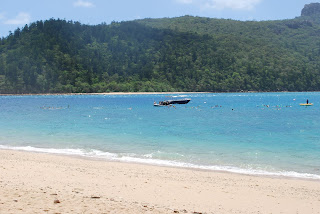 What is meant for us is that when we went snorkelling (all the equipment was provided with the rooms) was that we could snorkel over a brand new shipwreck. The boat was re-floated the next day ($4000 bill heading the owners way) so we got ourselves the only day you will see that boat at the bottom of the sea- for the moment anyway.

Hook Island is a major stopover for a lot of the boats making their way through the islands, so we were lucky to go out at a time when there was noone else around. We went out twice within a short period, the sea was not so calm in the Hook Passage, the second time round the visibility was incredibly low, we could actually only just make out the boat. The coral is quite impressive in that spot, once you swim out through the reeds and mud closer to shore, there is quite an array of fish around, both of us saw quite a big blue fish out there (sorry my tropical fish knowledge is incredibly limited). 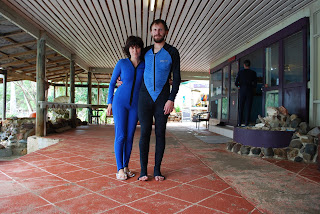 Here is a picture of us being incredibly good looking in the stinger suits. It is important to wear these so that box jellyfish don't give you a potentially lethal sting. Unfortunately they don't cover your arms, feet or face and apparently numbers are on the rise.

As it is the wet season at the moment, most of the time we were there the rain was absolutely belting down. This was unfortunate, as it meant we could only get out for short trips around the island. We went around the other side of the hill to Pebble Beach, I saw a small wave breaking, I think it crazy storms this could pick up a proper wave. The Great Barrier Reef blocks most of the swell coming into the Whitsunday region, but there must be some surf around somewhere.

In the evening we played pool against a couple of guys that worked there, and had a fish dinner. I don't normally eat much seafood, but this was freshly caught and cooked by the guy that runs the show on the watersports side of things, I thought I should give it a go, it was quite tasty.

We were in a 6 bed dorm room, but there was no one else in there. As a matter of fact there was barely anyone in the whole place. In the afternoon I had a nap and slept like a baby, even though the mattresses were super thin, this probably affected my evening's sleep as I had a lot of trouble sleeping.

Due to the big swells we weren't able to go back on the resort's own boat, so we had to go on Voyager, and do the entire tour. It was kinda cool because we didn't have to pay to go on the tour, but I had a lot of work to get down and would have preferred a more direct route.

We went to Whitehaven Beach "would you look at this, 98% silica sand, isn't it beautiful"- that's what the tour guides say everyday. We were there for an hour and a half, just chilling on the boat. Lunch was provided before stepping off the boat, it was quite a good spread, cold meats and salads. I'm fairly certain all the boats have almost the exact same lunches, as it was quite similar to the lunch we had on Ocean Rafting.

Speaking of them, we saw our driver from when we went on Ocean Rafting and had a good chat with him. He was a really nice guy. They had one of those soft balls for the beach with them and I did a couple of tricks, not very well, and he was mightily impressed. That is definitely the trip I most recommend, such a fun day out.

The Voyager trip is probably not so much for me. Being up in the big boat felt pretty similar to being in a bus, you're quite a long way up from the water. After passing by Hamilton Island and Long Island we had one more stop at Daydream Island. Now I know my daydreams don't involve screaming children and horrendously fat people waddling around a pool, but that's what's there. We ended up playing chess on one of those giant chessboards. I was on the attack, ready for victory, but made a stupid error and that was check, mate. I would have to say Daydream Island is a nightmare of a place and I hope never to go there again.

Getting to Airlie Beach was quite a relief, it was nice to have the bus take us directly back to the hostel. I was sunburnt, quite tired, and I decided that big pile of paperwork could wait until the next day.
Posted by Daniel Boyle at 11:31 PM