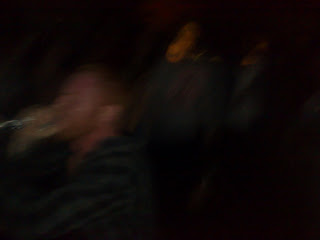 So last night I went to see some bands. Ruiner were originally going to play Canberra on their tour, then it fell through, then they were going to add a show at somebody's house, that fell through too. Then Bar 32 came up with the goods.
Yet another venue is out of action, The Warehouse in Fyshwick didn't last long at all. I wish someone with some big money would buy up all the empty shops in Civic and turn them into venues. There's a lot of room for it to happen now.
If I was rich the old Impact Records (later JB), the recently closed Dick Smith, Cafe Macchiato/Bourbon Bar and The Akuna Club would all be "happening" places. Places where bands can play, all people welcome, etc. For now they lie empty. An ugly opening to a visitor's Canberra experience. These are all on main corners, they shouldn't be empty shops.
Unfortunately. I am not at all rich, far from it as a matter of fact. One day I'm going to do a zine about all the venues that have popped up in Canberra and then disappeared soon after. Even since I've lived in Canberra I've seen the rise and fall of Ground Floor, Green Room, Sound Underground, Jamison Inn and a few more. There'll be plenty of material for that one.
Ok, back to the show. It was only ten bucks to see an international band, Hopeless from Melbourne, and I Exist, who are becoming bigger than God these days.
We got there just a few minutes before I Exist started, got a good position at the edge of the bar, something to lean on. Unfortunately the sound levels for I Exist were way off, they were turned up to loud, the sound was not clear at all. They were pretty good still. New guitar player Josh (Pod People, Bloodduster) brought his metal element to the fore, throwing a few horns for good measure.
They played some new tracks, things are sounding a lot more metal these days. They are no longer this metal influenced hardcore band, they are really just a metal band. They are a band that is going to go far, they've gone a long way already in such a short time.
Hopeless were up next. They played a bit of a mix of old and new stuff. I only know the songs off "Dear World", which is a great album. They played a fair few songs off that to a fairly unreceptive audience. The audience was mainly people with arms folded, maybe a brief head nod every now and then. It probably reminded Hopeless of their hometown, Melbourne.
This was really a show I expected people to be going pretty crazy at, but it was fairly quiet all night. I don't know if it was because it was a Tuesday night, can't go to hard on a school night, or an unfamiliarity with the bands, but each band had a much better reception the last time I saw them in Canberra.
Ruiner took a while to kick off, but it was still before 10pm when they started. Once again, I only knew one album (What Could Possibly Go Right?), but they played a lot of songs off that. There were only 3 or 4 people who were really getting into, that was the biggest surprise to me. Ruiner are a band that is conducive to mic grabs and pile-ons, that kind of thing, but it really just wasn't happening. However the few people really getting into probably would have made it worthwhile for the band.
At one stage I jumped from the flashing light dancefloor, onto Jake (I Exist)'s back and got to have the mic grab. That was pretty sweet. Probably the highlight of the night.
So many people have told me the new Ruiner is subpar, but the new stuff they played seemed just as good as the rest of their songs. It wasn't as good for me, as I didn't know it. I wish I hadn't bothered listening to the knockers, and actually had a listen for myself. However it's too late for that now.
I did a good deal, I swapped a bunch of zines to the guys from Hopeless for a t-shirt. You can grab a copy at their Sydney shows in the next couple of days. I also did an interview with Rob and later went to Transit and did an interview with Jon Dangerous of the mighty 4 Dead.
I had a good chat there with Jon, another bloke Gav, his brother used to be in Lawnsmell, it was a great night all round for me. I also picked up "And The Boat Sails On" a little magazine about the last Ruiner tour with Break Even. I'll go more into that in another post.
Posted by Daniel Boyle at 7:14 PM

Yo, I better get a copy of the next issue!