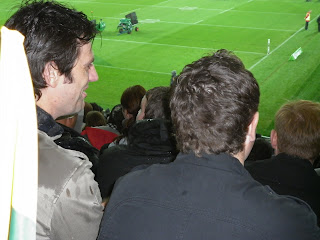 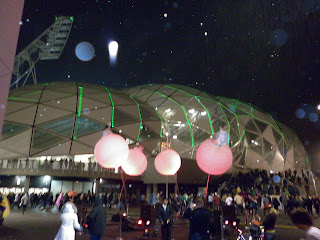 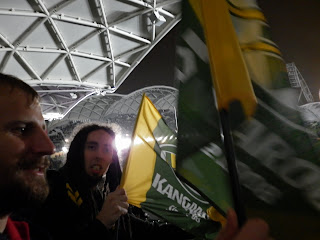 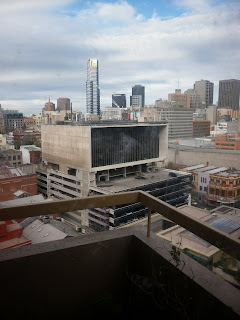 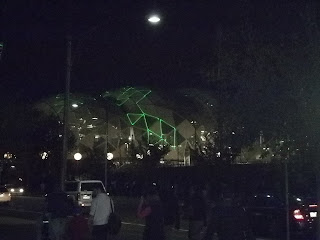 On Saturday I got to have a couple of new experience. For one, I had never been to a test match before, another thing, I had never seen a stadium make its debut.
So, I joined nearly 30 000 others in welcoming AAMI Park to Melbourne's sporting landscape. The stadium itself, it was great. The match, wasn't amazing, but it wasn't terrible either. In the end the Australian squad prevailed 12-8. Not long after the break, they were up 12-0. I believe they were just trying to hold on to that lead, which is nowhere near enough a lead to hang on to.
Every week it seems I see the Raiders, or another team blow a 20+ point lead. The Raiders managed to get one player in each team, even though they have not had a stellar year. Bronson Harrison and David Shillington were neither stars, nor shocking performers, but each did their job.
In fact, I would struggle to pick a "player of the match". Sam Thaiday was reasonably impressive, as was Rapira for the Kiwis, he would have been their best. Greg Inglis made a number of breaks, however more than three times he failed to pass to Josh Morris, unmarked outside him, trying instead to charge straight through the opposition numbers.
I bought the cheapest seats in the house, not long before the game, only a couple of days before the game sold out. It turned out, these cheapest seats were also the driest, for some. Unfortunately for the guy two rows in front of us, he faced eighty minutes of water torture. Drip, drip, drip coming straight down from the roof.
Queues for food and drink were long and prices were expensive. I have seen nothing but positives in reviews of the stadium, including the food and drink facilities. These people must have given the food and drinks a miss. Once I finally got to the front of the line, it seemed the beer had dried up. I heard someone quip in the stands "with a new stadium come new stuff" and roll his eyes. He was right. A more senior member pressed some buttons and the beer was back in action. The trays they gave to hold the beer were inadequate however, with most of my purchase ending up on the steps of the newly built stands.
The Kiwis looked to be staging a late comeback, but two missed Isaac Luke conversions proved the difference. The New Zealand fans were clearly more passionate, every time a run was on the chant went up: "KI-WI, KI-WI, KI-WI". The Aussies seemed slightly less enthused.
Although the game was billed as a sellout, it seemed on 29,000 people decided to show up to a 31,000 seater. Not sure what happened to those extra couple of thousand people, it was a wet night, maybe they didn't feel like it.
Posted by Daniel Boyle at 9:31 PM