Melbourne to London via KL

I just had myself quite a whirlwind adventure. Last year I went to Europe, I had a great time and decided that it would be an excellent idea to go again. Less than a fortnight after coming back, I had booked a one way ticket to London. Air Asia were doing a special and I got a ticket via KL for just $500. I had no plans in particular for what to do. If I saved up a bit of cash I could think about living and working over there, if I didn't manage that, I could just go for a short trip.

Having already been overseas once this year (to Papua New Guinea in February), I was running low on annual leave. I also didn't save a cent, so shortly before going I got my credit card limit slightly increased.

I had a couple of days in Melbourne before going and had a lot of fun there. I got to see the first ever game at the new stadium, a league test match between Australia and New Zealand. I bought some new books, which were incredibly unnecessary purchases, I was already weighed down by the bulk of too many books. I got to see a bunch of friends and drink numerous beers.

My flight left around 2am, not the most pleasant of hours for flying. When I saw that I had a whole row to myself I was very impressed. For such a low fare, I can't say I was expecting a lot. I got to get some sleep on the way to Malaysia, which was a good start.

For some reason I had a bit of energy on arriving in Malaysia. It was that mixed with the fact I knew I had a bit of time to kill, I played a little bit of Footbag. Here's a run from that day. It's was a short session, as it was quite hot, even though it was only early.


You can really hear the birds in the background.

I had a bit of a wander around the museum area of KL. I was looking at going to the walk in aviary which is not so far from there, however I had my big pack on and didn't want to lug it too far. In my wanderings I actually popped out to the street I was staying in. Unfortunately, it was a very long street and the hostel was at the other end.

I stayed in the BackHome hostel, which was excellent. I booked through HostelWorld, using the simple formula of choosing the hostel with the highest rating. This choice paid off, it was very comfortable and clean, yet not a big hit on the budget either. I went up the KL Tower to get some full views of the city, impressive to say the least. I had a meal from one of those street vendors where everybody eats with their hands. I hoped for the best that wouldn't ruin the rest of my trip through a food poisoning incident. 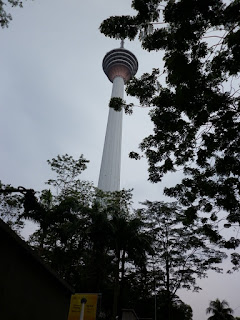 The next day I dined at a vegetarian restaurant for my lunch. I had a mock chicken curry. The reason I went in to that particular place was that I wanted a small quiet place, and this one fit the bill. Alongside my lunch I had a delicious fruit drink. The fruit drinks over in Malaysia to a great deal to combat the heat and humidity. I rode the monorail a couple of times and took a look at the Petronas Towers. They are closed on Mondays, but I had no need to go up, as from the tower you look a long way down to see the Towers. 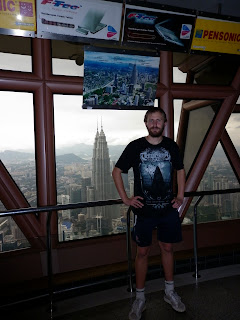 You can see the towers in the background, well below me.

Another late night flight, then I was arriving into England. “Welcome to London, it's one degree”. Springtime. The pleasant welcome continued with the immigration official. He wasn't impressed by me at all. I might note I had a fairly thick beard raging at this time. I resolved the next day to get a haircut and beard trim.

Eventually I got through, then went by bus into London proper. I had arrived at Stansted, which is a fair way out of town. I got off at Marble Arch and I was starving. I had gone down to the Tube station to see if they had any lockers, as I didn't want to drag my big bag around all day, but there was no luck there. Coming back up, the first place I saw was a KFC. Not a real traditional way to start the day, but it was some version of food.