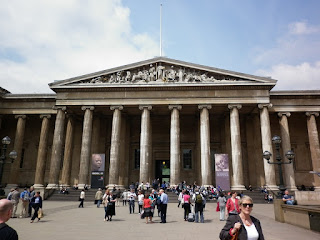 I guess I should finish what I started in regards to my recent trip. Better get it done before I fly away again. This time last year, I had never been overseas. Come August, I will be off on my fourth overseas trip. That's a good stat. I have well and truly "caught the bug" and have a lot more planned as well.
My last day in England was warm, but it was more humid than sunny. It was still brilliant that it was wasn't raining. I went into the city and wandered around, I got to the British Museum. I would say if you had a detailed look at every exhibit there, you would know the entire history of the world. The British Empire's centuries of raiding other countries has paid off for their museum, it is a huge place.

The British Library I was not so impressed by, I was expecting another grand old building, but was faced with an ugly modern structure. The British Library is only a recent addition, around ten years old. They had an exhibition there called Magnificent Maps, I was keen to check it out, but I've got to say I was fairly underwhelmed by the exhibition, it just really didn't interest me that much.

From there I went back to Dan's, packed up my bags and made my way to Heathrow. Heathrow is probably the only airport that I've seen that has a great outside area. I played footbag in the courtyard there for quite some time. A little kid watched me for a while, I started chatting with him, he was moving to Brisbane.

I checked into my flight so I could get rid of my pack and spent the last of my pounds on beer and dinner. I boarded my flight with Qantas. Flights aren't really exciting, so why bother talking about it. I'd just like to say, I probably had a more pleasant experience flying with Air Asia than with Qantas.

We stopped in Singapore a short while and I got in 30 minutes of footbag. Once again, it was just good to get the legs moving, get some blood flowing after sitting down for so long. After a slow start I actually started playing reasonably well. Next stop was Melbourne.

I went onto the internet, and decided it was going to cost the same if I went home that day, or if I flew home from Brisbane the next day. After a wander round the city, I was back on the Skybus. I played some more footbag in the airport in Melbourne, then I had to wait a couple of hours in Brisbane for my friend Josh to pick me up.

I got some more uni work and some other writing done, so it was a productive time sitting down in the Brisbane airport. Josh cooked a steak, which tasted great. I went off to the Evergreen Terrace show. The tickets were more expensive than I expected, but at least it wasn't sold out. I walked in midway through Dropsaw, their new stuff sounds even heavier, if that were possible. No one was really into though, just a few people headbanging at the front.

More people were into Casey Jones. All their songs sound exactly the same. People looked like they were having fun though. I stood about halfway up the back, hanging out for Evergreen Terrace to play. I moved over to sit on a small ledge once Casey Jones finished to make sure I got a decent spot. While I was sitting there, there were some fisticuffs around the merch desk, I have no idea what happened, but there were punches thrown. I filmed the opening song from Evergreen Terrace, “Enemy Sex”. Then I just watched the rest. It was a lot of fun, Evergreen Terrace are on of my favourite bands, especially in the live setting. I think this was the sixth time I've seen them, every time has been a really enjoyable experience. To top things off, they played Dear Livejournal, a song I don't think I have seen them play before.

I got the last bus back to Josh's place, got a good rest, finally in a bed, then he dropped me off at the airport the next morning. I got back into Canberra, I called Caroline to see if she wanted to kick that day, she come up with a better offer, a lift home. Sounded good to me.