Dancin' in the streets 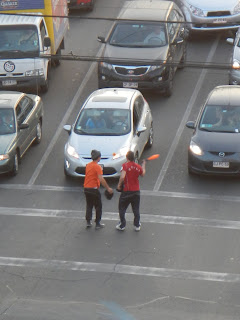 After almost 3 months I have finally got the courage to actually go out into the streets and play Footbag there. I have been thinking and talking a lot about this, since the day we arrived and I saw some jugglers on the street.
Here in Santiago, when they talk about a "street performer", it is a literal meaning. There are a wide variety of jugglers, fire twirlers and even sometimes acrobats. There is also this guy with these metal circles, and I don't understand how he gets any money at all.
Some weeks ago I was playing some Footbag just near the office where I'm doing my internship. It's just near the Bellas Artes museum, so there's a reasonable amount of people going by. I got talking to these guys for a while told me I had to play on the street corners, that I would be weighed down by all the money I would make.
So to properly introduce you to this segment, here is a video.

You thought it would be some footage of a juggler didn't you! Got you there. How about the "puffy shirt" on Mick Jagger. If you can't see the video, it's Mick Jagger and David Bowie singing "Dancing in the Streets".
So people always say things like "it looks like Riverdance" or "you must be good at dancing" and had a laugh at the end. They also say things like "you've got to much time on your hands". Nick Landes had a good response - "no, I've got too much time on my feet". So I am going to present a segment called "dancing in the streets" and hopefully it will be about my successful adventure in getting money for playing footbag. If not, it will be about the stories of misadventure, which make for better reading anyway.
So anyway, the corner right outside our window is a very popular place for performers, so today when I came home, I decided, this is the day. I packed a few footbags, and also one juggling ball. I hadn't really planned my performance at all, I just picked this day and I was ready.
The first round was TERRIBLE- I dropped it so many times, and decided I wouldn't even bother going into the crowd to receive any payments, as it was unlikely they would be forthcoming anyway. The whole concept is similar to monks begging for alms. When someone wants to make a payment, they hold their hand out the window, and if you don't see them they will beep their horn to get your attention.
So the next round I had developed my plan, only slightly further ahead. I decided to use two bags- one Elemental which has some streamers on it. I would begin with some big high kicks, and do tricks like ducking and spinning. When I inevitably dropped it, I would change to a Hania bag that I use all the time. This one is not really great for performing, but it's the bag I am most used to, so I can step up the difficulty.
My first payment was from a taxi driver. From my research- I really have been regularly watching these performers, seeing how many payments they get, etc. The most I have seen was 5, just the other day. Up until then, 4 was the best I had seen. Today, in my first day, I managed 3 in one go, which I was happy with.
One lady even gave me a luca (a 1000 peso note, worth about $2). I think she was hoping I would give her some change, but I used a trick I found stall holders in India use a lot, "no sir, I don't have any change". That was the truth anyway, as I had just begun.
I wasn't really sure how long to continue on for. At first I was thinking I should push on for one hundred attempts, but I would say I was getting more payments than I expected. I was also getting more tired than I expected.
About 30 minutes in, the traffic patterns seemed to change, often leaving me with no audience to begin my show. That was about 6:30, so I guess that's something for me to keep in mind. In the end, I packed up and came home, conveniently across the road. I counted my coins, which were mainly 100 peso coins. I had come away with 5,400 pesos.
That's about $10.80, which is not too bad for 45 minutes of effort. Next time I will have to continue my efforts. One thing I was a bit put off by, was having someone steal my little bag while I was in the street. I think the more money you get, the more likely that will happen. Today it didn't happen though, so hopefully that's a good sign for the future.
Francisca told me it's not something I can make a career out of. I'm not so sure she's right...
Posted by Daniel Boyle at 3:29 PM