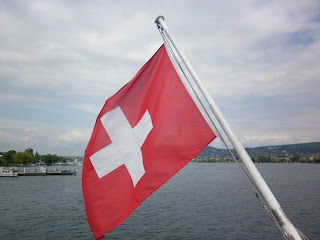 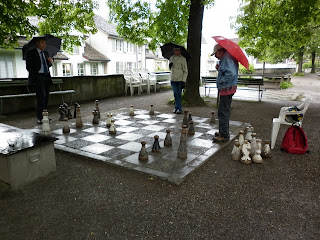 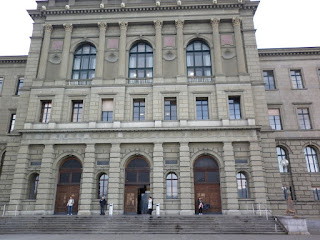 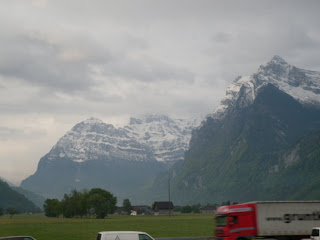 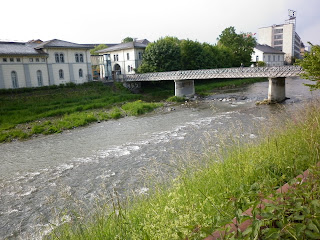 As we went into Switzerland, I looked to the mountains on my left. There was snow, not just on the peaks. I thought that they were coming into summer in just a couple of weeks, but it was looking mighty cold.

Into Zurich we pulled, numerous hours after leaving Vienna. I was meeting Flavio at ten, so I wandered the streets for a while. It was still cold. I found a spot nearby the train station to play some footbag while I waited. It was warm in there. I don't remember hitting anything good, but after such a long time sitting down, it was nice to get some physical exercise.

The hauptbhanhof at Zurich has a special meeting point, so we arranged to meet there. Flavio arrived on time, and we wandered over to a place that claimed to have the best coffee in town. I hate coffee so I couldn't tell you if it was or not. I had a hot chocolate, which was quite good. The best thing about it was that it came in a giant cup, and also, it was hot. There was also a heart in the pattern atop the hot chocolate. Maybe the barista had the hots for me too. I would say probably not though.

I had asked at the station how much the TGV to Paris would be, it was going to be a lot was their basic answer, then I still wouldn't be in London. I wasn't due to fly out until the evening, but after missing one flight, I felt it was going to be best to get back to London the day before my flight.

Flavio told me to look at a website called Kayak, which compared flights. I got a flight into Luton for the bargain price of one arm and one leg, but when you're booking the day of the flight, you can't expect a lot of sympathy really. I booked my flight for the evening, Flavio had to go back home and go to uni, I wondered what to do for the next eight hours.

I thought about getting in touch with Tina Aeberli, women's world champion for Footbag, but I didn't really feel like playing footbag, apart from that, it was cold and it was raining. Another lovely spring day. Whilst I was pondering what to do, Reyna came and said hi.

I guess you could say Reyna is something between a cousin and a family friend. My Uncle Steve used to go out with her mum for a long time. A lot of the conversation was about how strange my Uncle is, which is a lot. She was booked on a train for 7pm, so we wandered around the streets of Zurich together.

The sun showed some brief signs of arriving, so we took what was advertised as a tour boat on the Zurichsee. It was actually just a ferry, that people got on and off from. It was a good way to look around the city, but we were glad to get off once the “tour” ended. Mainly to get away from the horrible Americans sitting just down from us. I don't think I've ever heard such stupid people in my life.

Reyna talked about going shopping, I shuddered at the thought, but then she mentioned shopping for chocolate, I said that should be the first port of call. A genius idea. Not long after the chocolate we parted ways, her to shop, me to a nearby pub for a drink.

I got to the Flughafen fairly early, I didn't want to miss the plane. Actually, I got there really early. I wondered if I would have any trouble with immigration. No troubles, it was very smooth sailing, I read F Scott Fitzgerald whilst waiting. Very apt, because the story I was reading was happening in Zurich.

I was flying with Easyjet, had no troubles with them, nor with Ryanair when I flew with them. I guess I was lucky, I was surprised though to find that Ryanair runs at a 90% on time rate, which is apparently the best of the European airlines.

A few hours later I was back at Dan's, we drank beer and listened to classic rock. It felt like home, and the news said I could expect 25 and sunny the next day.