You would think I would know travel by now 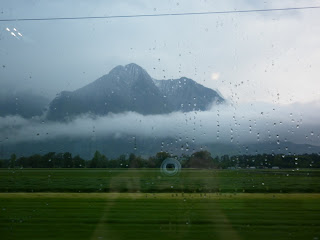 The next day, my plan was to make my way over to Bratislava again, maybe do some sightseeing, then take the plane to Barcelona. It was going to be great to see the sun. My reading of the bus timetables was totally wrong, and I made another mistake by going all the way to the other side of the city to take the train at the beginning of the line at the Südbahnhof , rather than just continuing on the U3 a little further to Simmering. Had I made that decision, I would have gone to Barcelona.

In the end I missed the plane. On an adventurous trip in a taxi through the streets of Bratislava, I had a bit of a whirlwind tour. “How long does it take to get to the airport?” The taxi man's eyes lit up and he asked if I needed to go fast. I strapped my seatbelt on tightly. I still missed the plane.

What to do now, what to do. I went to the ticket desk and asked how much a ticket on the next plane would be, it was going to Liverpool in England. 350 Euros was the response. They had free wifi at the airport so I browsed that for a while, letting various social media websites know just how much of an idiot I was, whilst searching for a solution. I wasn't so sure. Maybe I could stay in a hostel and fly out the next night. I decided I needed to get moving westward, I had 48 hours to be back in London. I didn't want to miss my plane back to Australia.

Back to Vienna I went. On the trip I wondered where I should go. I thought if I could get a train that was going somewhere overnight, somewhere far away, that would be a good idea. Frankfurt and Munich were sounding good, maybe I could even get through to France. There was a train to Zurich, that sounded like a good option, it cost a whole lot more than my plane that I'd missed though.

I had a couple of hours wait, so I went to an internet cafe for a while. I struck lucky and got talking to my friend Flavio and arranged to meet for a morning coffee in Zurich the next day. He was going to come over from Luzern, about an hour away. I got a kebab for dinner, which is also what I had for lunch. They are so cheap there, it's hard not to eat them.

On the train trip I met a guy who had a much worse day than me. He was working on cruise ships, but had planned to fly to Belgrade, I'm not so sure why. He was turned back by the Serbian authorities, then the Austrians told him his visa only got him one way travel through Austria. He talked them into letting him into the country, he was heading for Linz where his ship was docked. By the time we got to Linz, around midnight the ship had sailed on for Passau. He was also having trouble with the immigration officials on the train. They spent a good while looking at my passport, which was in good order, but they spent at least an hour looking at his. I looked at of the train to see if they would be taking him away, but it seemed like he was walking away, passport in hand.

The rest of the way passed uneventfully. My compartment was shared with some German speaking ladies. They would say things to me that I vaguely understood, I nodded with a stupid grin on my face, then tried to drift off to sleep. I looked out the window at a particular stop, and thought “hey, we're in Liechtenstein. I'm sure many of the Austrians on board wouldn't have noticed that, but they may not have walked across the country from one side to the other.
Posted by Daniel Boyle at 1:38 AM