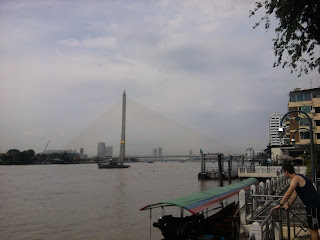 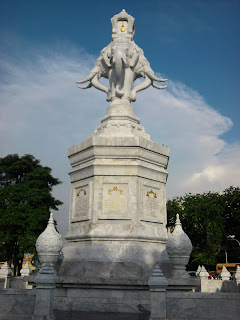 So I left my dear wife under the pretty vague instructions "just get us a beer will ya luv". She came back with a brown bottle, looked like a success. Siam Sato it is called, and after my first swill I thought, this sure isn't beer.

It tasted a bit like cider. After a quick trawl on Google I found this thread "SiamSato, what the hell is this?" http://teakdoor.com/thailands-wine-cellar/2817-siamsato-what-is-this-stuff.html

It seems it's some kind of rice wine.

We met with Jonathan today. I first met him in the hostel in Canberra about 2 years ago, I was just about to leave for my first overseas journey and since then we have always talked about how great it would be to be travelling, compared our different plans and ideas on the travel game.

It is quite amazing how in the end, we just left on our journeys a couple of days apart. I visited the hospital today, the seemed to do a good job and the doctor gave me a lot of different medicines to take. He said not to walk too much, but we did go for a short walk, where we may have seen the Queen (? not too sure about that), but we were stopped from crossing the bridge while a convoy of cars went by).

We are not too sure of where to go next. Unfortunately this current hostel was fully booked for tomorrow. We haven't really finished with Bangkok (too be honest we've barely started), so we booked another night next door. We did this in Jaipur and the second place was totally substandard compared to the first place, but hopefully they will be just as good as each other.

Here's another thread on SiamSato, this time from the Lonely Planet Thorntree forum. http://www.lonelyplanet.com/thorntree/thread.jspa?threadID=1724931

You know I have drunk many boxes of fruity lexia in the past so this is just another crappy drink. It's not really good, but not as bad as some describe. I'm not so sure it would keep the tuk tuk's going.

Speaking of these scammers, Jonathan has a good attitude towards them, he makes it all part of the game. They say, oh hello where are you going to? "Phuket, take me to Phuket, how much?" or other things that would take something like a week in one of these suspiciously put together contraptions. Keeping it fun is a good way to keep up the positive attitude as fighting with touts and other dodgy characters can really bring you down.

Compared to India, Thailand doesn't have the same volume of this annoyances, actually Thailand is pretty easy going, especially in the traffic department. It is good to see people driving on the side of the road they are meant to be on, and not going full speed down the wrong side at an oncoming bus.

As much as I have said that this SiamSato is ok, it's taken me a good long time to get even down to the first label. Probably wouldn't trade on this one again...
Posted by Daniel Boyle at 4:49 AM