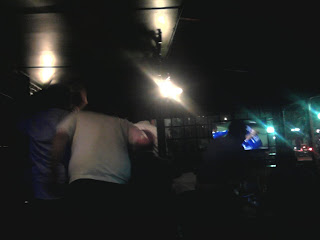 Last night I went and met up with a French guy, Julien. I met him at the hostel last year in Canberra. I'm pretty sure he was wearing a Ruiner shirt or something, so we got talking. I can't remember exactly but I think we went to see I Exist play, maybe with The Abandonment. I think Antti, one of the Finnish guys I made good friends with also came that day.

Anyway, Julien is travelling in South America now, he's been in Ecuador, Peru, Bolivia and now in Chile. We met up and got some dinner first. Of course it was some kind of sandwich variety. I tried to mix it up a bit, and should have learned from the last time, to just go for one of the usual options. This one wasn't too bad- but the previous time, I ordered what was basically a gherkin sandwich, I bit into, thinking it was covered in melted cheese- but that was actually artichoke- I hate artichoke.

This time around in was something like ham, Camembert cheese and a couple of other things. I also thought it would be a hot sandwich, but wrong again. No big deal though, it was cool to hang out and talk about our respective travels. He went to the World Cup last year in South Africa. I am going to try and go for sure in Brazil, maybe even try and get some kind of job on it.

So I told him there was The Match on last night- La U were playing with Vasco de Gamma from Brazil. We walked around a while, and I was actually surprised not to come across more places. We ended up going to the area around the street Suecia, which is mainly for gringos- we went to a place around the corner a bit, but there were actually no gringos to be fan, just abajos, the fans of La U- the underdogs.

This was the semi final, second leg of the Copa Sudamericana. The first leg in Brazil was 1-1. We were talking earlier about how teams, national teams, like Brazil and Argentina are on their way down- it's becoming much more even through South America, and it seems to be similar for clubs. I think normally you would think "team from Brazil vs team from Chile, Brazil will win. Not the case this time.

I thought Vasco de Gamma looked pretty solid to begin with, they had some good long passes that went straight to the blokes down the front- but then they took a free kick which practically went out of the stadium, and the fortunes changed from there.

La U went in with a 1-0 lead in the first half, the first goal was greeted with a mild celebration, but with one of the Vasco players receiving a red card for an elbow to the face, which looked more like it belonged in UFC, rather than on the field, it was time for azul to put the finishing touches on. I had remarked earlier that our UFC fighter, number 23, had looked like he had packed it in earlier in the game. The ball went out, he didn't chase it at all- and the TV zoomed in on his scowl on the face, which said "I hate losing, I want to go home". So he took the early exit, and La U scored practically immediately afterwards, capitalising on his absence down the left wing.

And straight after that goal, most of the people in the pub got up to the feet, raised their fists in the air and shouted-

The game was as good as over by then, though Vasco had a couple of shots on goal, there was no comeback on the cards. U de Chile were through to the finals for the first time ever, everybody clapped at the television.

I walked home, which takes about 45 minutes. All through the city you could hear horns honking to the tune of (Chi Chi Chi, Le Le Le). Not just for the walk home, but of course, throughout the night.