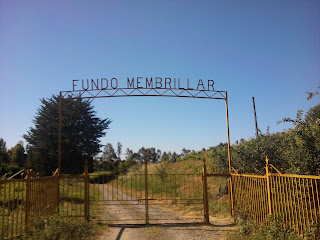 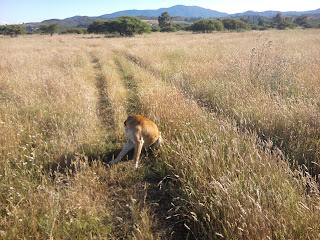 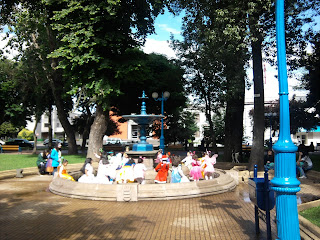 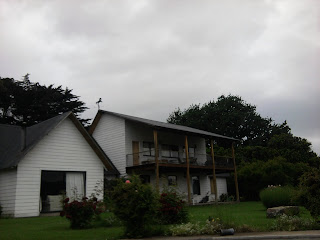 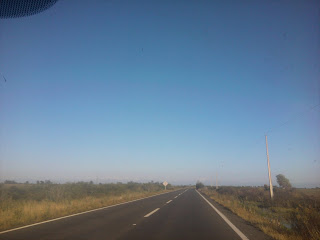 And so we arrived, eventually at "The Farm". Dad spent a lot of his youth heading up to the family farm just outside Lismore, and I think he liked the idea of our new family doing the same sort of thing in their own youths.
And so it was we drove in to the gates, the sun having gone down, 10 hours in the car- and ready for sleep. That was not on the cards at all- it was till a few hours until dinner time. Carolita and Alex made us very welcome with appetisers, and then they said they'd just put something small on to cook.
Of course, this is Chile. There is nothing small, and being at the dinner table after midnight shouldn't have come as a shock...So our meal the first night was the local specialty sausage, longanizas. They are a very thick sausage, and well known not just in Chillán, but all through Chile.
The next day we went in to Chillán itself, to the mercados (markets). Markets are a big deal in every town in the world, but I'm really enthused by them- most of the time the stalls are just selling the same junk anyway. We had lunch there in the markets and I would really have rather not...You may see in one of the pictures at the top- it seems it was "dress up as a princess"day for some little girls.
Back to the Fundo and it was time for another late night feast. It was just Alex joining us that evening, but after seeing a motorised rotisserie to cook up a huge lamb, Dad had to concede that the Aussies can not match the Chilenos in the BBQ stakes. An interesting note, as people will often ask "what's a common Australian food". The fact is their really isn't one at all- particularly one that's common throughout the world. I answered one day, Thai Green Curry!
Anyway, we had this BBQ, and it was an enormous amount of food, as all Chilean meals are, there is no doubt about it, by the time I return to Australia I will be double the size I am now. It seemed as we were heading down they were actually expecting all 16 of the family to come down in the bus we had for the wedding. Amazingly, we all could have fit, easily. The house was a big place, with another little cottage which we had for ourselves.
It was interesting before our feast, Alex got me to come with him to collect some carbon for the fire, and also to check on some wood. He doesn't speak English at all, but he listens to Frank Sinatra. (righto). In my broken Spanish I found out he likes the music but he doesn't know the lyrics.
It was a late night again, so the next day it was good to just take it easy. We went in to the very small town of Ñipas. This was once again, the home ground of the huasos, the cowboys. You would see them in their wide, flat hats, almost everywhere. Despite being small, and not having much of interest in the town, it was a worthwhile excursion- first of all just to see another place, but also to feel completely "in the country". Funnily enough though, there was an internet café, which Mum and Dad both used. In there I played one of these soccer games, which I couldn't work out if it was something like a pokie, or like a pinball machine. Either way, it was boring and I lost. I won't make that mistake again.
Dinner was a much smaller, simpler and specifically earlier affair that night. I walked down to the river with Mum and Dad and a couple of the dogs from the property. They really just made their own way along, Mum was concerned about them- I said they'd know they way a lot better that us. I was right. As we were slogging through long grass, this dog is wagging its tail with a smart look, on the other side of a fence, following a nice trail.
In the morning it was time to bid farewell to the farm and head back towards the north. Once again we had a long way to go, although this time around we had a few options in mind. The first option was where to go instead of over the wobbly bridge- at the time we left it was closed for repairs. So it was, I'm sure to Dad's great pleasure, a gravel kick off for our journey back.
The difference was, the majority of this time would be spent on the freeway, going fast.
Posted by Daniel Boyle at 1:30 PM