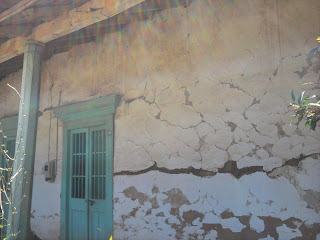 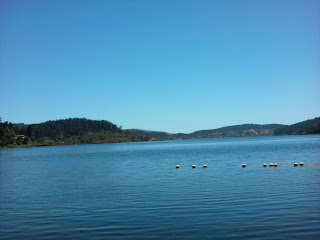 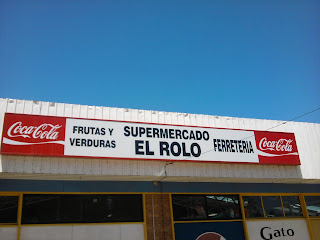 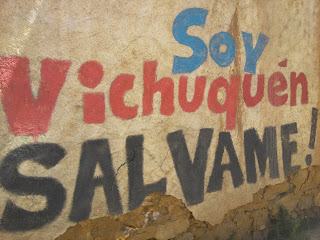 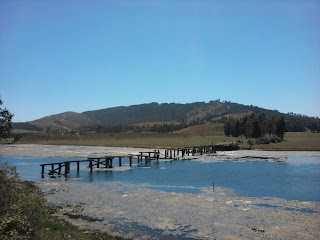 Since coming back from our little trip, which of course was only a couple of days ago- I have notice when we talk about where we went, when we went to Vichuquén, I don't think anybody we have met along the way had been there before. Places like Pichilemu are pretty frequently visited, and places further down the line a few people seem to have relatives who they occasionally visit, but this area, this was the middle of nowhere it seems.
Our path took us from a place called Lo Valdivia, where we encountered a few cows on the road- not an uncommon feature back in Australia once you get out into the countryside. The middle Chile landscape was a lot like the Australian landscape, and I guess that gets helped along by the plantations of Blue Gums all throughout the countryside. We found out later that wood is mainly used for fence posts or firewood...
The road took us along the Western side of Lago Vichuquén, which in itself is a fairly large lake. Of course it's a blip on the map when looking at all of Chile, but it was quite a nice place to go alongside. At the base of the lake - Aqualarre we stopped for some ice cream, it was a pretty hot day after all, and then made our way into the town itself, which is located a bit further south.
As you can see in a couple of the pictures at the beginning of this post, it was fairly heavily struck by the earthquake in 2010. Most other places we went you couldn't see too much damage, it had either been fixed already, or they were lucky to avoid damage. But here in the middle of Chile, the cracks (literally) were showing. There is a museum in town which is highly recommended, however I think the real display is simply walking around and taking a look at the houses and other buildings. The town itself is almost 500 years old and was declared as a typical area in the early 90s- similar to being on the Heritage Listing in Australia. The town is also known for brujas y brujos (witches and wizards)- apparently due to a perfect triangle between two other towns, and in this zone they would perform their magic- (righto...)
We had lunch there in Vichuquén, a pretty big feed- as they always are in Chile. By the time we finished our almuerzo it was about 3pm and we still had a long, long way to go. Dad had originally said he wanted to take the coast road, but our best option may have been to stay on the tar from Bucalemu. In the little book there was a picture of a very nice wave at Pelluhue, and the Lonely Planet kicked back in at Buchupureo, which they gave a very positive write up for. I had also seen some pictures of the Iglesia de Piedra, a cool looking cave formation in Cobquecura, so my idea was to navigate along that way.
After passing by Constitucion I started doing the numbers, if we went that way, our final destination in Chillán was still going to be hundreds of kilometres away. It was time to do a bit of a restructure. We stopped in Chanco, a smalll little town which is known for its cheese- a bit like Bega, really. On a side note, you can buy Bega Cheese in the supermarkets over here. Just like at home, it's too expensive for me.
Once getting to Chanco we had a bit of a wander around, and it seemed we had a new friend. I think Dad was pretty keen for a coffee as he had been driving through the whole day with the curves and everything, and was feeling the journey. So this nuevo amigo took us to a small little places, and at the end of the day waited at the corner to wave us off. Maybe they will talk for months - did you see those Australians come through town. Just south of Chanco it was time to head inland. The road further south became dirt, and the mention of more gravel I think had Dad shuddering. So we had a driver change and Francisca got moving through towards Parral, where would join up with Ruta 5, the main highway which runs right through Chile, from end to end. Unfortunately this road, and actually all the roads we had driven through, were full of roadworks- of course there is still a lot to be down in response to the earthquake.
We stopped again in Parral, which is probably similar to a lot of the cities along the Panamericana (Ruta 5), lots of huasos (cowboys) around, similar looking shops and a bit of a dry feel to it. It was only once we were heading out of there that it seemed we were actually getting close to our destination.
It was a different feeling gunning it at 120 down the freeway, after an average speed for the day of about 40km/hour. So it didn't take us too long until we were turning off a little south of Chillán, on the road to Concepcion, and then inland, over a very wobbly one lane bridge, to arrive at our destination- Fundo Membrillar.
Posted by Daniel Boyle at 9:48 AM