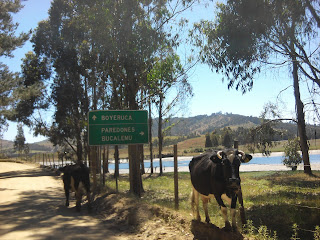 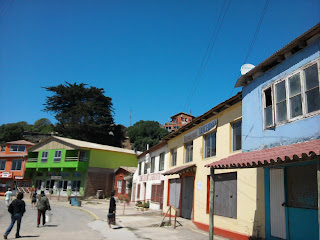 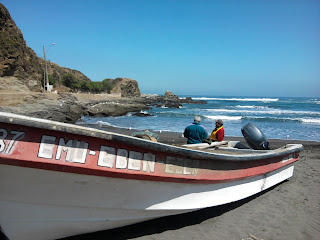 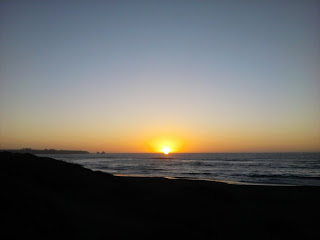 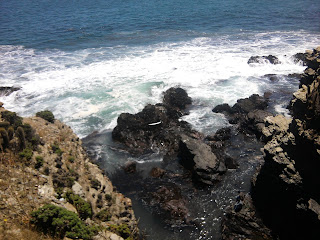 The next day we went down for a surf check to kick off the day. There was no need to wake up early, it seems there's no dawn patrol here. The surf was looking smaller and I still had the memory of some pretty fresh water from the day before, so I suggested we head a bit further down the coast, possibly in search of another wave.
There were no waves to be found, but we had an interesting little trip anyway, we drove down to Bucalemu, which was about 30km from us. On the way we picked up a hitchhiker, which of course was much to Mum's satisfaction...although she couldn't argue when Dad used the excuse that he picked the bloke up to practice his Spanish. The guy we picked up spoke no English at all, so me and Mick were getting by with the little that we knew between us. It seemed he was going to Bucalemu for work and then back to Pichilemu in the afternoon. He also had 6 kids, 5 sons, 1 daughter.
Once we arrived in town, I must say we were all surprised to see a student protest- a student protest of primary school kids! They were playing their drums and waving banners and blocking the road. Our new mate suggested we just drive straight through them, or tear down the opposite (wrong) side of the road. Dad displayed patience as we eventually found a place to get around them, come to think of it that was a bit of a surreal experience.
We got down to the beach and had a bit of a walk around, there were a bunch of fishing boats coming in, and it sure looked like the pescadores had worked hard out in the seas- each of the boats were packed with fish. Old ladies would come down and put in their orders- 1000 pesos ($2) got one lady 3 filleted fresh fish- try getting anything for $2 back home...
Dad was keen to get back in to the water, but it just didn't look appealing to me, so Alison went out in my place, with no wetsuit. She would have been cold. We had eaten some pretty enormous empanadas for lunch- as a matter of fact I ate two, so maybe I was in no condition to be floating around in the surf- maybe there would not have been so much floating in that case...
We had a very good dinner at the hostel, and directly after dinner we made the dash down to the beach so we could see the sunset. The oldies took their time, so there was no sunset to see by the time they got down there. During the middle of the night, somebody had the audacity to call me at 4:30am- I didn't get the chance to answer it and give him a serve- but shortly after I felt my first earth tremor. It measured 5.4 on the Richter (nothing, they say) and gave the house a good little shake, but it was only short lived, a few seconds. Half of our gang didn't even hear it, and Dad wasn't sure if he dreamed the earthquake up.
The next day we took our time to get going, which was a pretty major rookie error. The fact was we had a long way to go, whichever way you looked at the map, and the course I selected for us was probably the longest, due to the windy dirt roads throughout. We passed through Bucalemu again, and although the Spanish guidebook- kind of like an NRMA book covered the territory, there was no mention of it in the Lonely Planet. We passed through localities such as Lo Valdivia and through windy mountain roads filled with blind corners, before coming to Lago Vichuquén. It was still a while until the roads got any better, and that I will fill in over the next posts.
Posted by Daniel Boyle at 11:38 AM