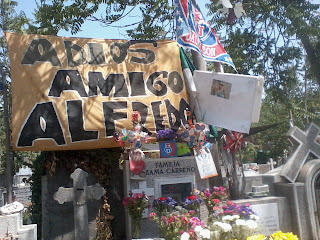 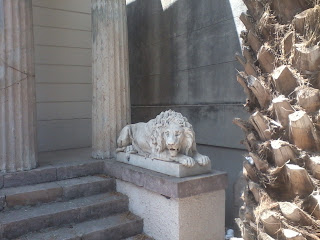 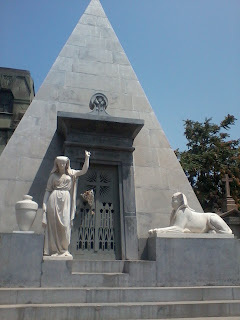 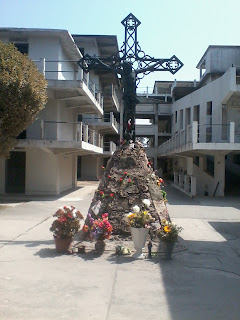 Today we went for a bit of an explore in the streets of Santiago. We took the metro and got out at the station Cementarios, which is the home to two different cemeteries in Santiago. We've been here for 3 months now and Francisca has always talked a lot about going there.
Myself, I always found the idea a bit creepy- but today was the day to go. First of all we went to the cementario católica, where the layout is more like a suburb than a cemetery. There are a variety of different levels and buildings, and of course, as in all of Chile, there is an area for the richer people and somewhere for the poorer people.
It is very interesting though, as it's quite a departure from other cemeteries I have seen before. Of course having these things which look like houses, but are actually graves, that's kind of creepy. From the first cemetery, you head across the road to cemetario general, which is a very large space, which of course we could not see all of. Apparently they have night tours there each week - now that sounds even creepier, but I think we will check that out next Friday.
Francisca's grandmother is buried there, so we paid our respects there, and then we went just around the corner, where they have a wall dedicated to people who were killed or "disappeared" during the dictatorship which lasted from 1973-1990.
There was a big controversy recently when the education board, which of course features a former member of the secret police, who also has the last name Pinochet...well, they have decided to change the description in textbooks from "dictatorship" to "military regime".
That didn't go down so well...
It really was an "own goal" by the government here in Chile, as education has been the subject of protests for over 6 months. I'm sure it will continue to be as long as Chile retains the highest price of education in the world alongside some of the lowest government spending.
Anyhow, the wall at the cemetery has thousands of names on it, and it is very disturbing as many of them have their age- there are so many who were 17, 23, etc. So many people so young, you never know what they would have gone on to achieve.
We had a wander around the cemetery, not looking for anything in particular. There are some pretty amazing buildings in there- but rather than the style of the cemetery across the road, which is almost like apartment blocks, these had individual mausoleums. Many of them had very intricate leadlight window designs on the back, and we also came across one that was more like an Egyptian or Aztec crypt. 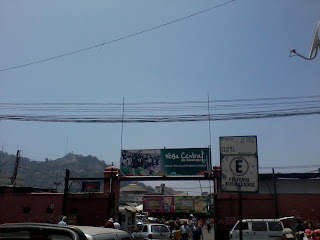 From the cemetery we walked down Av La Paz towards Vega Central, which is a big market. I'm sure I have expressed my thoughts on markets before in here, but in short, they are really not my scene. We got some good things though. It is a big place for fruit and veg. I was surprised when we headed for the metro and it was the station Patronato. I had thought we were actually going in the complete opposite direction.
In a day where the specific aim was to go and explore some new territory, I thought it was funny that we ended up catching the same bus home that I take almost every day of the week.
Posted by Daniel Boyle at 11:34 AM