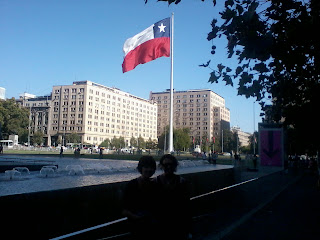 Our friend Bron arrived in Santiago a couple of days ago. I guess what is most interesting for me is giving a comparison to when my good friend Doug arrived, on just the day after I had arrived. That meant I knew absolutely nothing about the city, and we were discovering things together.
The photo above doesn't really do much justice, but it's of Francisca and Bron and the enormous flag outside La Moneda, the presidential palace. At the gallery below there was an exhibition of the Chilean artist Matta which we went and checked out, it was really impressive. I think a lot of his ideas were probably well ahead of his time.
The previous night we went to a farewell at the bar The Clinic. I hadn't been there before, but I had a really good time there. Funnily enough, the bar was pretty packed well after midnight on a Monday night. That is just something that is quite rare to see in any Australian city.
Speaking of Australian things, our guest came bearing gifts - some packets of Tim Tams and a couple of boxes of Chicken Crimpy shapes. Excellent! Our good friend Villa came over last night, and rather than going to a bar somewhere, we just drank some wine and ate our Australian snacks, along with some frambuesas (raspberries) that we got at the markets earlier in the day.
The first superclásico between Universidad de Chile and Colo Colo happened last night in Temuco, a while to the south. I think the coach of Colo Colo said it best "there are no friendlies with La U". Next year I might try and go down to that area around this time of year to cover the games.
Posted by Daniel Boyle at 2:53 AM