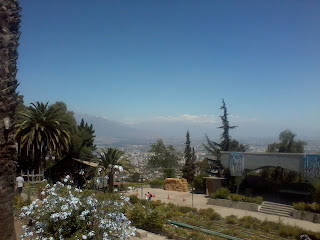 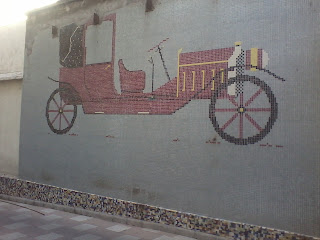 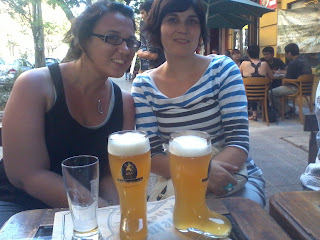 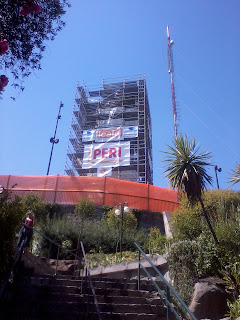 As I mentioned in the last post, our friend Bron has been visiting us here in Santiago, which has been great to see a familiar face. She also brought Chicken Crimpy shapes and Tim Tams, that was good too!
Anyhow, yesterday I was feeling pretty good right through the day, I got a lot of things done and then we had a great afternoon. I woke up with a pretty mean headache, which could have really ruined the whole mood of the day.
However, I decided to have a footbag session and a swim. I played with a new footbag from the company Phat Tyre, which they sent me for free - that was pretty nice of them. It's a much bigger bag than I'm used to, but it will be great for doing performances.
Like when I go to the TV station next week... (that one might be a story for another time). I hit a lot of harder tricks, even things like double spinning clipper, which I only learned recently. After the session, I jumped into the pool, which is a great way to finish things up.
So once Bron woke up we went and met Francisca, she has just started working a new job. Once we met, we went to get a completo at Dominó. That sure is an experience for a foreigner. Even for myself, it's a bit of a whirlwind, as everyone wants your place to stand and eat a completo of their own.
Once we finished our lunch, which of course doesn't seem like that much - after all, it's just a hot dog with some extra flavours added, it still makes you very full though. We took a walk and sat by the fountain in the shade. We actually sate there for ages, as it was quite hot yesterday, and there was a slight breeze which made things quite pleasant there.
We walked down through Bellavista and to the funicular to head up to Cerro San Cristobal. Of course, every visitor that comes here we will probably end up taking there, as there is such a big view of the city from there.
Unfortunately the big statue of Mary was having some renovations done, so you couldn't really see it. It was almost like Mary was in jail. I was telling Bron about how enthusiastic Chileans are about Catholicism (sometimes...) and that most big days on the Catholic calendar have their own public holiday. Since we have arrived there have already been holidays for All Saints Day in November and the day of the Immaculate Conception in December.
Up on the hill we had some Mote con Huesillo, a very traditional Chilean drink - apparently drinking it up on the hill is the place to drink it as well. It is kind of like a peach iced tea with wheat inside it as well. It is very sweet, but very nice on a hot day. Which yesterday definitely was.
We went back down in the funicular, then we stopped by the Picasso exhibition at Fundación Telefonica. I have walked past that building a number of times but never gone inside. The exhibition was free, though it was only a fairly small room of mainly drawings, done with pen or pencil. We weren't really in there for so long, but it was nice to be out of the sun.
Bron and I wandered around a bit more, then decided it was time for a beer. We saw a place in the shade, so that looked like a good option. The people on the next table were talking in English and by my excellent perception skills, or what some may call eavesdropping, I gathered they were here in Chile for the Start Up Chile program, and that one of them was talking about Jogabo, the pick up soccer thing I play in sometimes.
Something else came up, they were saying something about telephone numbers and whether you could change them, so I butted in to their conversation and told them a new law had just come through so you could do exactly that. We got talking after that, and made some new mates.
Francisca came along, and we switched from Cristal (the cheapest beer), to a German beer that came served in a boot. The Botín de Oro... We farewelled our new friends, who are working on a pretty cool science project which I may also talk about another time.
We took a bit of a walk and went to a Peruvian restaurant. I had been craving a steak for a while, so when I saw filete mar y tierra (basically a surf and turf), I knew what I was after. We drank some pisco sour there, and of course had to finish the meal with dessert.
Aside from all the sight seeing activities and a bit of fun, I also made a couple of good contacts, and may have even picked up a bit more work. As well as getting a couple of new additions for the I Love Chile website.
Posted by Daniel Boyle at 5:37 AM