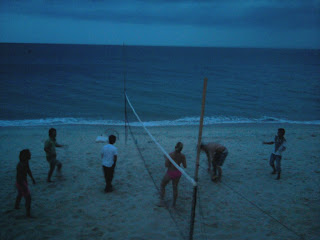 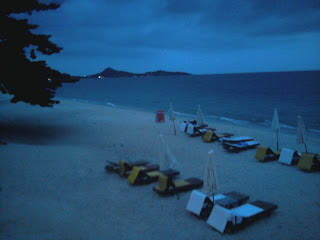 Today, after quite a long trip down from Bangkok, we arrived in Koh Samui. I only got a couple of pictures on my phone a while after the sun had gone down (above x 2). I guess this island has a reputation as a pretty touristy place, but where we're staying, of course it is a tourist area, it's other western people, but it's not too crowded where we are staying at all. We are staying at the Southern end of Lamai beach. This isn't the main tourist hub, but you know, it's probably 50 metres from our room to the beach, and that's quite alright by me.

If the weather stays good tomorrow, I can strongly see us staying on another couple of nights. What an intriguing experience the old night bus was. Some things you read (eg Lonely Planet) are very much against taking these buses and suggest going to the government run buses, however I read they were more expensive and less comfortable.

The main thing for me was that they offered a hostel pickup. Of course I was surprised (though I should not have been) when a tuk tuk came to take us to the next stop. I had originally guessed that some kind of van would get us and take us to the bus station. Even though I went against the advice of the Lonely Planet, which TBQH hasn't provided a whole lot of helpful advice for us in the first place, I though that old mate in the hostel was too nice to sell us a dud deal. He seemed to want the best for everybody, and I didn't think he would be associated with any kind of scams and rackets, but I wasn't so sure once the tuk tuk dropped us just around the corner from Kao Sahn Road.

So we stayed there for a while and we didn't really know what was happening. I started talking to a couple of other people standing around, but they had this "too good for you" attitude so that conversation didn't get too far. After some time, it was quite a long time, maybe 45 minutes we were herded along to somewhere a little way up the road. A new bloke came and got all the receipts back off everyone. Of course every receipt would get a return visit with payment of their commission. We were waiting in this holding area for some more time, I got talking to a couple of blokes who lived in England. Most of the people we met in the course of the trip were English come to think of it.

Anyhow, one of these first guys was heading down to NZ for the World Cup (Rugby) after his travels in Thailand. I got talking to him about Union even though I don't really know very much, but I steered the conversation into the Manly/Melbourne fighting match, what a classic that was.

Another classic in their encounters was that 40-0 Grand Final scoreline. The Raiders won the under 20s that day, what promise that showed.....most of that side are in the firsts lineup now and have brought them precariously close to the wooden spoon. Results from tonight mean they will narrowly avoid that unwanted piece of kitchenware no matter what. That has nothing to do with our trip though, back on with the show.

We're talking to the blokes and a guy tells us the bus will be hear in five more minutes. Sure. Sure enough, five more minutes we're crossing over the road to get to the bus. One of these Rugby blokes had gone to the toilet so he had to make a mad dash to even get on the bus. On the bus we saw a couple of movies. First up was The Lincoln Lawyer which was ok, particularly for a movie shown on the bus, but then the next one Stuck, this was up there with the absolute worst movies I have ever seen. Even the fact that the main girl (Mena Savari??) bopped some other girl, who was at the time naked, with a frying pan, could not save this movie. I am currently looking on IMDB for a verdict of just how bad this movie is according to others, but the bus seemed to give it an all round score of about 1/10.

After the movies it seemed it was time for lights out. We weren't too tired yet and we had a game of chess on the mini chess set I have been carrying around, which hadn't been brought out yet. We had played some of the other games inside, particularly snakes and ladders, but no chess. Anyhow, it seemed we were the only people with our above light on, but all of a sudden all the lights came on, it was time to stop.

As per any long distance bus trip, we stopped in some crappy little down, it was no difference to stopping at the service station outside of Holbrook or outside of Bowen on the Greyhound in Australia. I hadn't eaten any dinner so I gladly gobbled down some veg noodles, mainly as something to go with my concoction of medicines. I think there are still quite a few days to go until the 10 days of taking all these medicines concludes, but I'll say now that the old overnight bus wasn't the best for the ankle. All seems ok now, but not just my ankle,but my right leg was quite swollen from the ride last night.

Anyhow, we got some eats, then game back to our match of chess when suddenly it was lights out. Just like in the movies in jail, the time comes for lights out, but no warning. I guess that meant time for sleep. I really barely slept at all. Some posts ago I talked about some albums of the past, and instead of sleeping I was thinking of an album to represent each year. Seeing as some of these were a long time ago, I'm not sure if the years are accurate, but I had something for each year...

That was the list that I came up with of the top of my head, or something along those lines. Funnily enough it's the more recent years where I'm listening to albums a year or two out of date. Of course anybody could do this exercise one day and then come up with a completely different answer a few days later, and maybe I will experiment with that in some days.

Maybe after I'm done resting at the beach.....

So back on the bus, we're sleeping. Well I barely slept at all, but we have to be trying to sleep because you can't even turn on your light. I listened to some music for a while, and I was kind of hoping to drop off doing that, but no such luck. In the whole journey I don't think I would have slept much more than an hour.

I must have got to sleep in the morning because suddenly there was a commotion, it seemed it was time to get off the bus and change to our transfer to the ferry. Of course that was not just waiting where we arrived, we had to wait some more time for that, then sit on the bus to the ferry.

Even though it's just 10pm, I'm feeling pretty tired. I may continue this one tomorrow. We met some really nice people here at the place we're staying, can fill more about that tomorrow. I think the first thing to do tomorrow will be to walk the length of the beach which is just a stone throw away. Of course I would love to do a run, but that's not really on the cards.
Posted by Daniel Boyle at 8:24 AM